Driving Question: What makes me, me and how do I fit into the world around me?

Driving Question: How can we teach others about how to care for their body and how the systems work?

Driving Question: How can our team convince a group of ”Sharks” to help finance our idea?

Driving Question: What would a viable, sustainable and successful colony outside of Earth look like? 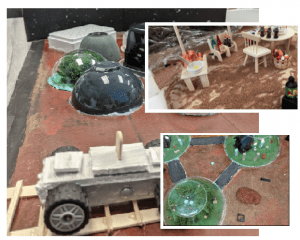 Driving Question: How Can I Become Wealthy? 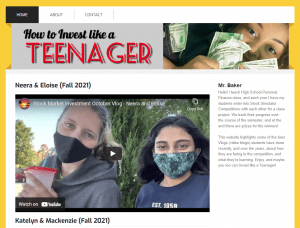 Driving Question: How is media and literature a comment on the social structures and attitudes of the time?

The purpose of our Contemporary Pilgrim project was to play the role of a modern-day Chaucer. We were to create a new pilgrim to the prologue who represents a certain group of people through satire. Our pilgrim’s name was Mark. We chose to make fun of him being a trust fund baby through satire. Our chosen elements for Mark were the money being thrown at him by his parents, His red Rolls Royce, and his mansion. Through these elements were able to highlight Mark’s privileged status as a member of a society known as trust fund baby’s. The tone of our poem is one of ridicule. We are ridiculing how Mark does not understand the importance of money due to him not having to earn his own. The project ties with The Canterbury Tales because the Canterbury Tales is an assortment of characters that come together to complete a story. Chaucer does this by highlighting certain traits or characteristics of the characters. By following Chaucer’s structure of building characters we allow our characters to be dissected similarly to the characters in The Canterbury Tales.

This project uses stereotypes in modern-day showcase hypocrisy within those groups. In a world centered around social media, no one is how they seem on the internet. We illustrate this idea with our character, an influencer for mothers. Our character is a hypocrite because she is giving other mothers advice on how to be a good parent. However, her obsession with social media and the internet makes her neglectful and absent. She sets unrealistic standards for other mothers and makes women who follow her platform feel inadequate as mothers.

We used a phone case and eyelashes as our required 3-D element. The phone is significant because it consumes our character’s life. We applied makeup on one side of our character, while the other side has no makeup. This represents the contrast of how our character presents herself on the internet and how she appears in real life, two very different things. Pictured in the top left corner is a daycare, her destination. Even though our character makes a living off of giving parenting advice and stays at home with her children, she doesn’t want to be bothered with her kids during the day so she sends them to daycare. The Mercedes is her transportation, a very unsensible car for someone with small children.

We used satire and sarcasm in our poem to criticize our pilgrim for being a hypocrite. On her social media platforms, she presents herself as this wonderful mom who has the answers to being a perfect parent. In reality, she is profiting off of her kids by creating content with them that doesn’t align with the actual relationship she has with her children.

Chaucer’s use of satire in the Canterbury tales highlights hypocrisy within different stereotypes found in the 14th century in England. Most of Chaucer’s stereotypes are derived from the Catholic church, as that was the most influential platform in Chaucer’s time. Our group wanted to use a figure found on social media because the internet now dominates our societal standards and expectations. Through satirical devices, our project portrays the idea that nothing on the internet is as it seems. This message is similar to that of Chaucer, who expressed that church figureheads weren’t always who they seemed to be.